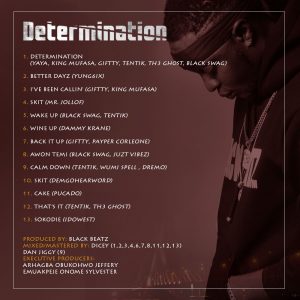 Black Beatz proves he has the sound to take Hip Hop to new commercial heights with hard-hitting beats that fit perfectly in the club, radio, streets and in your headphones.

According to Black Beatz, the album is titled Determination because that’s exactly what has gotten him so far. “I had a plan and I was determined to make it come to a reality, I want everyone who purchases this album to be inspired by that.”